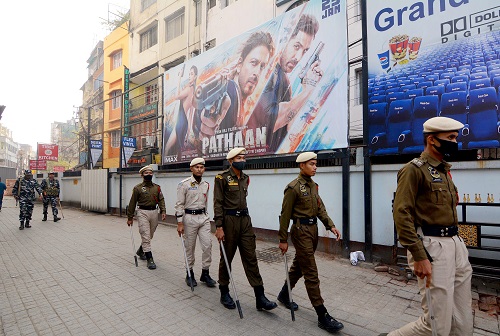 Cops patrol outside a theatre during first-day first show of 'Pathaan' in Guwahati/ANI
Some right-wing organisations held protests against the Shah Rukh Khan-starrer Pathaan in parts of Madhya Pradesh on the day of the film's release on Wednesday, forcing some theatres in Indore and Bhopal to cancel the morning shows.
The film has been opposed by some segments who claim that its song called Besharam Rang hurts the sentiments of Hindus.
In Bhopal, Bajrang Dal activists staged a protest at Rangmahal Cinema Hall and forced the theatre owner to remove the poster of Pathaan.
The protesters also torn the film's posters.
When asked about the protests by the right-wing organisations outside the cinema halls, Bhopal's additional commissioner of police Sachin Kumar Atulkar told PTI that police force has been deployed at these establishments following the protests.
"No untoward incident was reported from anywhere. As per the information I have received, no show was cancelled, but we cannot say if the cinema hall owners have taken a decision to this effect on their own," he said.
Bhopal's Bajrang Dal joint-convenor Abhijeet Singh Rajput said the activists of his organisation staged protests at three to four cinema halls, including Rangmahal and Bharat in the city, and got the posters removed.
People were urged not to watch the movie, he said.
When asked, the owner of Rangmahal Cinema Hall, Ranveer Singh told PTI that the first show of Pathaan was cancelled due to the protest, while other shows are being held normally. -- PTI
« Back to LIVE