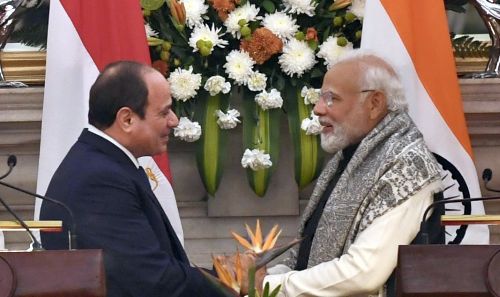 Prime Minister Narendra Modi on Wednesday held wide-ranging talks with Egyptian President Abdel Fattah El-Sisi, focusing on ways to enhance bilateral ties in a range of areas, including agriculture, digital domain, culture and trade.
The 68-year-old influential Arab leader, who arrived in Delhi on Tuesday on a three-day visit, is the chief guest at the Republic Day celebrations.
"Deepening our bond with Egypt -- the natural bridge that connects Asia with Africa. PM @narendramodi and President @AlsisiOfficial hold talks adding momentum to the multifaceted India-Egypt relations marked by civilisational, cultural & economic linkages and deep-rooted P2P ties," External Affairs Ministry spokesperson Arindam Bagchi tweeted.
The Egyptian president visited India in October 2015 to participate in the third India-Africa Forum Summit. This was followed by his state visit in September 2016.
This is the first time that the Egyptian president has been invited as the chief guest to India's Republic Day celebrations. A military contingent from the Egyptian Army will also participate in the Republic Day parade.
India is keen to further expand ties with Egypt, a key player in the politics of both the Arab world as well as Africa. It is also seen as a major gateway to markets in Africa and Europe. -- PTI
« Back to LIVE