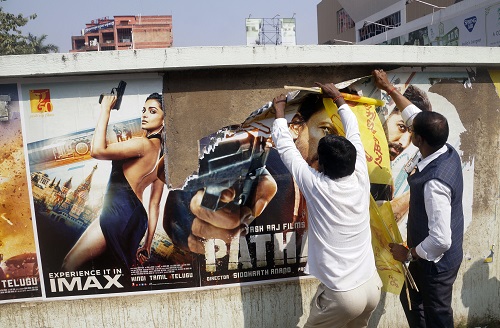 Kalinga Sena supporters tear a poster of the film 'Pathaan' in Bhubaneswar/ANI
A first information report was registered against an unidentified person for allegedly raising an objectionable slogan during a protest held by a right-wing organisation in Indore, Madhya Pradesh, on Wednesday against Shah Rukh Khan-starrer Pathaan, an official said.
The FIR was filed after some members of Muslim community objected to the slogan and staged an agitation.
Talking to PTI, Chhatripura police station in-charge Pawan Singhal said, "A protest was organised by an organisation in the premises of Kastur Talkies against Pathaan. During the protest, an unidentified person raised an objectionable slogan, following which some members of a community approached the police."
Based on the complaint lodged by the members of the community, a case was registered against an unidentified person under section 505 of the Indian Penal Code.
"The accused, who allegedly raised objectionable slogans, would be identified after the examination of a video that surfaced on social media. Further steps would be taken once the accused is identified," he said.
Before the FIR was registered at Chhatripura police station, the agitated members of the Muslim community staged a protest at Chandan Nagar police station against the alleged objectionable sloganeering in Kastur Talkies premises and demanded that an FIR be filed. -- PTI
« Back to LIVE