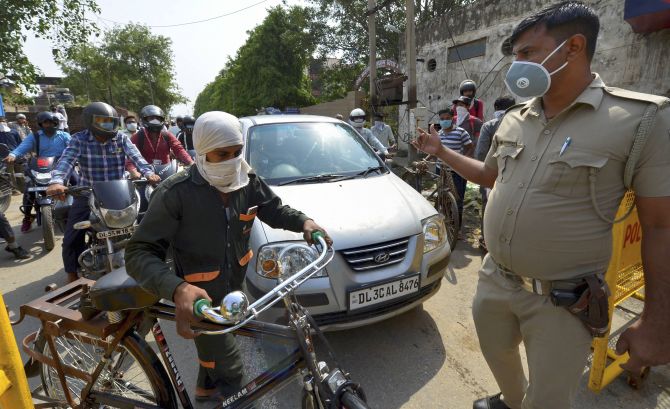 File image/PTI Photo
The Delhi police on Tuesday issued an advisory on traffic arrangements and restrictions put in place for the smooth conduct of Republic Day celebrations in the national capital.
According to the advisory, the Republic Day parade will start at 10.30 am from Vijay Chowk and proceed towards the Red Fort.
The parade will pass through Kartavyapath, C-Hexagon, the Subash Chandra Bose roundabout, Tilak Marg and Bahadur Shah Zafar Marg, Netaji Subhash Marg and Red Fort, it said.
No traffic movement will be allowed on Kartvyapath from Vijay Chowk to India Gate from 6 pm on Wednesday till the parade is over, the advisory said.
No cross-traffic on Kartvyapath from 10 pm on Wednesday at Rafi Marg, Janpath, Man Singh Road till the parade is over, it added.
"C"-Hexagon-India Gate will be closed for traffic from 9.15 am on Thursday till the parade crosses Tilak Marg. From 10.30 am on Thursday, traffic on Tilak Marg, Bahadur Shah Zafar Marg and Subhash Marg will not be allowed on both the directions, it said.
Cross-traffic will only be allowed depending on the movement of the parade, the advisory stated.
The traffic advisory suggested alternative routes which motorists can follow.
To go towards Mandir Marg, commuters can take the route from Madarsa, Lodhi Road T-point via Aurobindo Marg, AIIMS Chowk, Ring Road-Dhaula Kaun Vande Matram Marg, Shankar Road, the advisory said. -- PTI
« Back to LIVE