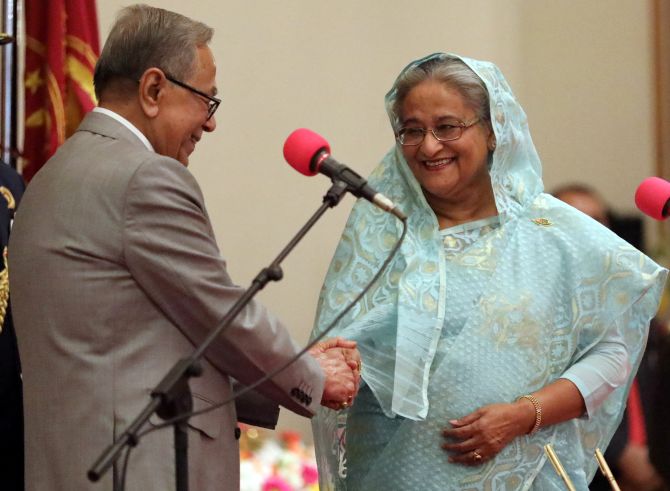 Sheikh Hasina with current President Abdul Hamid/Mohammad Ponir Hossain/Reuters
Bangladesh's election commission on Wednesday fixed February 19 for the polling to elect a new president.
The incumbent president Abdul Hamid cannot contest for another term as the country's constitution allows a maximum of two terms for a person in the post of president.
The tenure of President Hamid will end on April 23.
"The presidential election will be held on February 19 in line with the Article 123 of the Constitution," Chief Election Commissioner Kazi Habibul Awal told a news briefing at his office.
He said the voting to elect the country's 22nd president would be held between 2 pm and 5 pm in the Parliament Complex.
Lawmakers in Jatiya Sangsad (Parliament) elect the president for a five-year term in Bangladesh's parliamentary form of government while one can serve as much as two consecutive terms as the head of the state.
According to the CEC, the commission set February 12 for submission of nomination papers, February 13 for scrutiny and February 14 for withdrawal.
The ruling Awami League of Prime Minister Sheikh Hasina has an absolute majority in the 350 members Parliament. -- PTI
« Back to LIVE