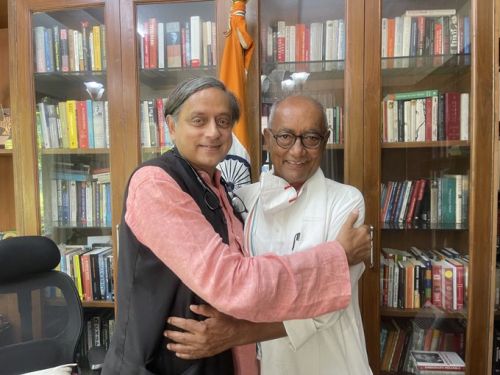 Shashi Tharoor shares this picture with Congress colleague and his presidential poll rival, Digvijaya Singh. "Received a visit from @digvijaya_28 this afternoon. I welcome his candidacy for the Presidency of our Party. We both agreed that ours is not a battle between rivals but a friendly contest among colleagues. All we both want is that whoever prevails, @incIndia will win!," Tharoor tweeted.
Senior party leader Digvijaya Singh, who left the ongoing Bharat Jodo Yatra, said he will contest the election and collected his nomination papers today. The only other person who has declared his intention to contest is Thiruvananthapuram MP Shashi Tharoor, who has said he will file his nomination papers tomorrow.
« Back to LIVE