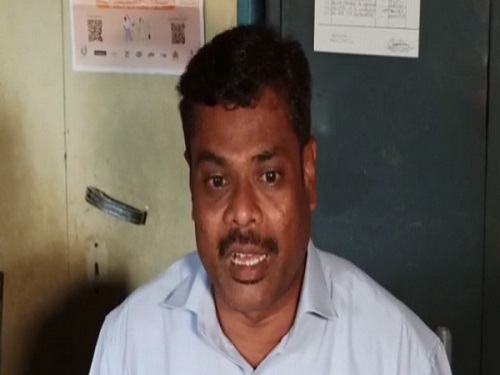 Suspended headmaster Abdul Munafar Bijapur/ANI
Karnataka school headmaster, who allegedly tried to facilitate the religious conversion -- has been suspended, a day after the state education department ordered an inquiry after the headmaster was heckled by right-wing outfit activists for organising an essay competition on Prophet for children of a government school in Gadag district on Wednesday.
Abdul Munafar Bijapur, the headmaster of the Government High School in Nagavi Village, had organised an essay competition on Prophet Mohammed.
Subsequently, the right-wing activists barged into the school premises and heckled the headmaster, leaving 172 students in a state of shock.
Earlier, an inquiry was set up pertaining to the matter.
After which Abdul Munafar, the headmaster, has been suspended.
"I'll get the complaint copy from Sri Ram Sene. I'll also get information from the headmaster of the school and students and provide them to the deputy director," block education officer Virupakshappa Naduvinamani said on Wednesday.
The activists of Ram Sene accused the headmaster of trying to facilitate religious conversion.
Sharanappa Gowda Haplad, a parent, said, "I came to know that the headmaster of the school was trying to impose Islam in the minds of students by conducting an essay writing competition and announcing Rs 5,000 prize money. The boys and girls in the hope of winning Rs 5,000 were made to write essays. His intention was to convert students. That's why I informed Sri Ram Sene activists. I want to know what's the intention of organizing an essay competition on Prophet Mohammad." -- ANI
« Back to LIVE