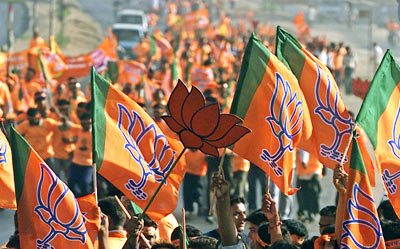 Balwant Singh Mankotia, a former president of the Jammu and Kashmir National Panthers Party, joined the BJP in New Delhi on Thursday.
He joined the party in the presence of Union ministers Jitendra Singh and Rajeev Chandrasekhar. and BJP general secretary Tarun Chugh.
After leaving the JKNPP, Mankotia, a two-time MLA, had initially joined the Aam Aadmi Party but was recently removed.
Welcoming him in the BJP, Chugh said Mankotia is joining the party as he is inspired by the leadership of Prime Minister Narendra Modi.
Mankotia is one of the prominent leaders of the region, the BJP general secretary said. His joining came just a day before senior BJP leader and Union home minister Amit Shah's scheduled visit to the state.
Mankotia cited several reasons for joining the BJP saying the immediate push was the government decision to declare a public holiday on the birth anniversary of Maharaja Hari Singh. -- PTI
« Back to LIVE