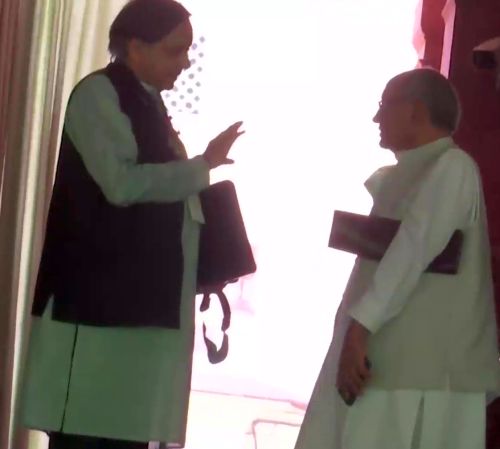 Congress leaders Shashi Tharoor and Digvijaya Singh are scheduled to submit their nomination papers for the upcoming presidential elections of the All India Congress Committee on Friday.
As per the information, Tharoor will visit 24 Akbar Road at 12.15 pm tomorrow.
He will subsequently hold a press conference at 1.00 pm at his residence on 97 Lodhi Estate (opposite Airforce Bal Bharti Public School)
Meanwhile, party leader Digvijaya Singh, another contender for the topmost position in the party, will also file his nomination tomorrow between 11 am and 3 pm.
Tharoor welcomed Singh's candidacy and said that both of them have agreed to consider it a friendly contest.
"Received a visit from [?]@digvijaya_28 [?] this afternoon. I welcome his candidacy for the Presidency of our Party. We both agreed that ours is not a battle between rivals but a friendly contest among colleagues. All we both want is that whoever prevails, @incIndia will win!," Tharoor tweeted.
Notably, another prominent contender for the President post in the party, Ashok Gehlot recently announced that he will not contest the elections.
"I met Rahul Gandhi in Kochi and requested him to fight the polls (for Congress President). When he didn't accept, I said I'll contest but now with that incident (political crisis in Rajasthan), I have decided not to contest the elections," CM Gehlot said.
Gehlot's remarks came after the veteran leader met with the party's interim chief Sonia Gandhi at her residence at 10 Janpath in the national capital.
« Back to LIVE