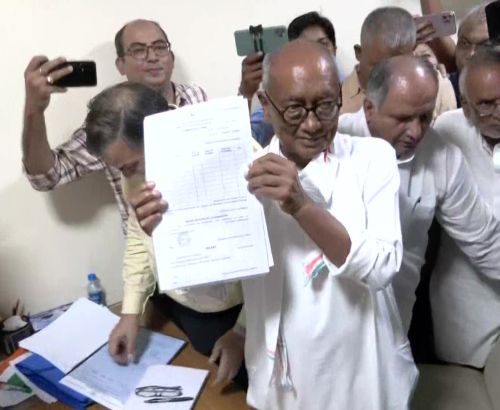 Digvijaya Singh holds up his nomination papers
With Friday the last date for filing nominations, Congress leaders are in hectic discussions to solve the political conundrum that has everyone guessing -- who all will contest the election for party president.
The discussions are mostly one-on-one, party insiders said on Thursday, a day of many meetings.
Rajasthan Chief Minister Ashok Gehlot met AICC general secretary Mukul Wasnik in Jodhpur House. K C Venugopal, also party general secretary, called on Sonia Gandhi at her residence. And senior leader A K Antony is learnt to have met Tariq Anwar at Kerala House.
Senior party leader Digvijaya Singh, who left the ongoing Bharat Jodo Yatra, said he will contest the election and collected his nomination papers.
The only other person who has declared his intention to contest is Thiruvananthapuram MP Shashi Tharoor, who has said he will file his nomination papers on the last day Friday.
Gehlot, who arrived in Delhi Wednesday night and is believed to have spearheaded a rebellion of MLAs backing him, is expected to meet Sonia Gandhi later in the day to clear the air on whether he will contest the poll.
Party sources said Venugopal is learnt to have discussed the political situation in the party after the Rajasthan crisis with Sonia Gandhi.
AICC general secretary in-charge of Rajasthan Ajay Maken also reached Sonia Gandhi's home for discussions.
As uncertainty mounted, Antony, chair of the party's Disciplinary Committee, met Anwar who has given a show cause notice to three Gehlot loyalists in Rajasthan.
Several names have cropped up for the party president's post.
These include Mallikarjun Kharge, Antony, Kamal Nath, Ambika Soni and Pawan Kumar Bansal, though most of them ruled themselves out of the race. Gehlot is not completely ruled out yet, according to sources.
Gehlot told reporters on Wednesday night that party discipline is foremost for all party workers and internal issues that have cropped up will be resolved soon. -- PTI
« Back to LIVE