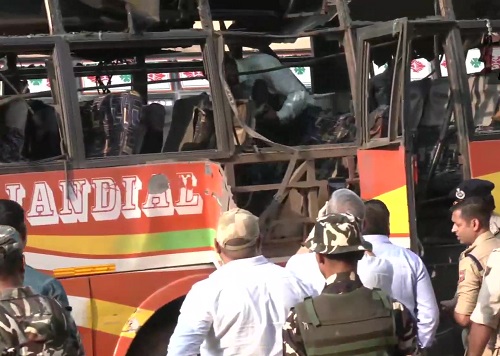 Suspected terrorists triggered a blast in a parked bus in Jammu and Kashmir's Udhampur early Thursday, nine hours after a similar explosion took place in the city but there was no casualty, the police said.
Additional director general of police Jammu region Mukesh Singh visited both the sites and said high explosives might have been used in carrying out the blasts which were of the same pattern.
"Initial examination points towards use of high explosives," he said, adding probe is on to ascertain whether it was the handiwork of terror modules.
The roof and the backside of the bus were blown away by the blast that occurred around 5.30 am but no one was injured, the police said.
The explosions took place days ahead of the visit of Union Home Minister Amit Shah from October 4.
He was supposed to embark on a three-day visit to Jammu and Kashmir on September 30 and hold public meetings in Rajouri on October 1 and Baramulla on October 2.
However, the visit was rescheduled.
Speaking to reporters at the site of blast in Udhampur, ADGP Singh said the "first explosion took place on a parked bus around 10:30 pm on Wednesday near a petrol pump.
Two people sustained minor injuries but are now out of danger".
He said the other blast that took place in the old bus stand area.
Singh said the nature of the blasts was being ascertained, adding probe is being done on various angles. -- PTI
« Back to LIVE