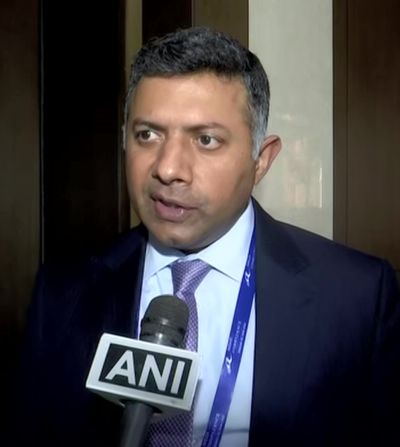 India's new high commissioner to the UK Vikram Doraiswami arrived in London on Friday and began his new charge by paying tributes at the Mahatma Gandhi statue in Parliament Square and Ambedkar Museum in north London.
The former high commissioner to Bangladesh received the credentials for his new post from President Droupadi Murmu earlier this week after his appointment was announced by the ministry of external affairs (MEA) last month.
The diplomat, an Indian Foreign Service (IFS) officer of the 1992 batch, was welcomed to the UK by special representative of the foreign secretary Adele Taylor, deputy high commissioner Sujit Ghosh and other senior officials.
Straight from the airport, High Commissioner Vikram Doraiswami went directly to pay tribute to Mahatma Gandhi at the Parliament Square in London, India House in London tweeted with images of the tribute.
From Bapu to Babasaheb Ambedkar: High Commissioner Vikram Doraiswami visited the Ambedkar Museum in London to pay tribute to the architect of India's Constitution, and the proponent of equity and social justice, it added.
Doraiswami succeeds Gaitri Issar Kumar, who retired from service as the high commissioner of India to the UK at the end of June.
« Back to LIVE