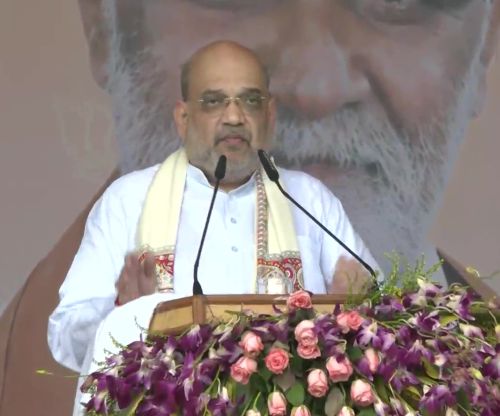 Home Minister Amit Shah addressing the 'Jana Bhavna Mahasabha' in Purnea, Bihar slams the Bihar CM.
"Nitish Kumar has no ideology, 'Mahagathbandhan' in Bihar will be routed in 2024 Lok Sabha polls," Shah said.
"Bihar public gave Nitish Kumar benefit of the doubt for long, now they know that neither Lalu's party nor your party (JD-U) will come this time. Only PM Modi's lotus will bloom in Bihar this time," said Shah.
"Can Nitish babu become the PM by changing political alliances? He has betrayed many since he entered politics. Laluji, beware that Nitish babu might sit in Congress's lap tomorrow leaving you behind," the home minister warned.
" In 2014, you (Bihar CM Nitish Kumar) only had 2 LS seats, 'naa ghar ke rahe the, naa ghaat ke'. Let the 2024 LS elections come, Bihar public will wipe out Lalu-Nitish duo. The BJP with full majority is going to come to power in the 2025 polls," Shah said.
« Back to LIVE