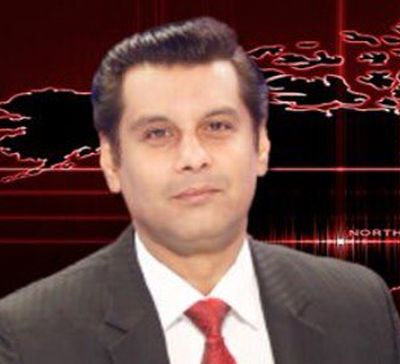 A senior Pakistan journalist, who was booked on charges of sedition and peddling anti-state narrative by the country's security agencies earlier this year, was shot dead in Kenya, his wife said on Monday.
Arshad Sharif, 49, a former reporter and TV anchor with ARY TV, and known for his proximity to former prime minister Imran Khan, had relocated to Kenya.
Sharif's wife Javeria Siddique took to Twitter on Monday to confirm the news of his death.
'I lost friend, husband and my favourite journalist today, as per police he was shot in Kenya, she said in a tweet. Respect our privacy and in the name of breaking pls don't share our family pics, personal details and his last pictures from hospital. Remember us in ur prayers (sic),' she added.
Foreign Office spokesman Asim Iftikhar said Pakistan's High Commission in Kenya were ascertaining information from authorities, according to the Dawn newspaper.
In August, Sharif was booked on charges of sedition for interviewing Khan's close aide Shehbaz Gill.
In the interview, Gill criticised the Shehbaz Sharif government for trying to pitch Khan against the country's powerful army.
Sharif subsequently fled the country, while ARY Network said it had parted ways with the journalist.
Sharif was born in the port city of Karachi in 1973, and started his journalistic career three decades ago.
He was awarded the Pride of Performance' in 2019 by Pakistan President Arif Alvi.
The journalist was last seen in the trailer of a documentary film titled Behind Closed Doors.
Arshad Sharif's death Is a great loss to journalism and Pakistan.
May his soul rest in peace and may his family, which includes his followers, have the strength to bear this loss, President Alvi said in a tweet.
His friends have called for an investigation into Sharif's death.   -- PTI
« Back to LIVE

For Adani, magic happened after 2014: In LS Rahul links group's rise to Modi

Leading the Opposition attack over the Adani-Hindenburg issue in the Lok Sabha, Rahul Gandhi on Tuesday linked Gautam Adani's meteoric rise to Prime Minister Narendra Modi's coming to power and said "magic" happened after 2014 that...

Moitra brought two birthday caps in the House to press her argument that the businessman being most talked about had "topi-pehnau-ed" the government.

Ballance made 23 Test appearances for England between 2013 and 2017, scoring four centuries.

The US military has intensified its efforts to collect the remnants of the high-altitude surveillance balloon from China that floated over the United States over several days last week from Montana to South Carolina.