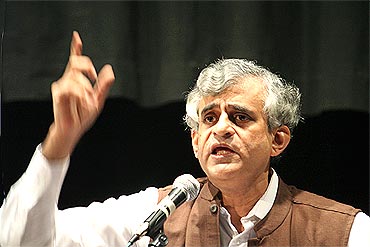 After his immensely successful Everybody loves a Good Drought, a researched study of poverty in the rural districts of India, award-winning author-journalist P Sainath will soon come out with a new book on India's freedom struggle.
The book, titled The Last Heroes and scheduled for release on November 21, celebrates little known fighters -- farmers, labourers, homemakers, forest produce gatherers, artisans and others -- from India's freedom struggle as it tracks the role of ordinary, everyday people in achieving Independence.
Published by Penguin Random House India, it is touted to be an attempt to tell these freedom fighter stories, giving them a recognition they "truly deserve, but were never granted".
"In the next five or six years, there will not be a single person alive who fought for this country's freedom. Newer generations of young Indians will never get to meet, see, speak or listen to India's freedom fighters. That's why and for whom I wrote this book," said Sainath, whose last book is currently on its 56th-print run.
"For quite a while now, we see young people being robbed of their history, denied any knowledge of what India's fight for freedom and Independence was about -- and who it was who spearheaded that struggle," he added.
The book highlights the distinction between freedom and independence that these fighters speak of. -- PTI
« Back to LIVE