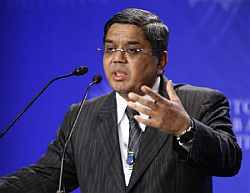 Founder chairman and managing director of Suzlon Energy and renowned expert on renewable energy Tulsi Tanti died due to cardiac arrest on the evening of October 1, a company official said on Sunday.
Tanti, 64, who was also the chairman of the Indian Wind Turbine Manufacturers Association, was on his way to Pune from Ahmedabad when he suffered the cardiac arrest, the official said, adding that a formal statement regarding his demise and cremation will be issued later in the day.
He is survived by his daughter Nidhi and son Pranav.
Tanti spearheaded the wind revolution in India with the founding of Suzlon Energy in 1995.
He envisioned the opportunity in the Indian renewable energy industry at a time when the global wind energy market was dominated by international players and characterised by expensive and complicated technologies that were largely unviable for traditional businesses.
Instituting a new business model, he conceptualised the end-to-end solution to create realistic avenues for businesses to 'Go Green' and thus emerged as a strategic partner in developing sustainable businesses. -- PTI
« Back to LIVE