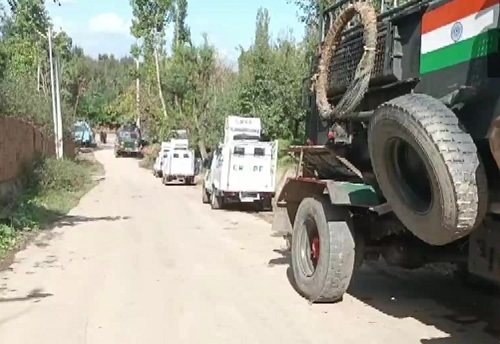 An encounter broke out between terrorists and security forces in the Baskuchan area of Jammu and Kashmir's Shopian, on Sunday, said police.
"Encounter has started at Baskuchan area of Shopian. The police and security forces are on the job. Further details shall follow," tweeted Jammu and Kashmir police.
Further details are awaited.
Earlier on Friday, two local terrorists linked with the proscribed terror outfit Jaish-e-Mohammed were killed after an encounter in Baramulla.
Jammu and Kashmir Police had gotten intelligence input on the presence of terrorists in Yedipora village in the Pattan area of district Baramulla.
A joint cordon-and-search operation was launched by police, Army and Sashastra Seema Bal in the area.
During the search operation, as the joint search party approached the suspected spot, the hiding terrorists fired indiscriminately upon the security forces which was retaliated effectively leading to an encounter.
The police had said in the ensuing encounter, two local terrorists linked with the proscribed terror outfit JeM were killed. -- ANI
« Back to LIVE