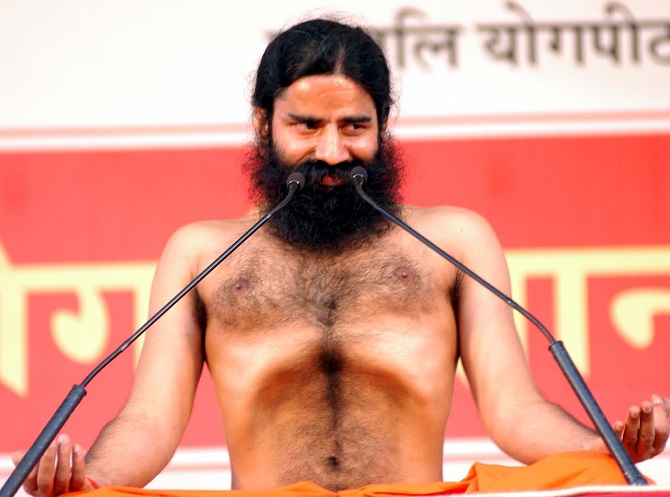 Bharatiya Janata Party leader Brij Bhushan Sharan Singh alleged on Thursday that Patanjali founder Ramdev set up a business empire by using the name of Maharishi Patanjali, who is considered the father of modern yoga.
Singh demanded that Ramdev and Patanjali managing director Balakrishna should stop using the Patanjali name in their brand, alleging that they did nothing for the maharishi's birthplace in Uttar Pradesh's Gonda district.
"Stop using this name in your brand. Build your brand with your own name," the Kaiserganj MP told the media at Maharishi Patanjali's birthplace in the Kondar gram panchayat, around 140 km east of Lucknow.
Singh, who has hit headlines for his statements often, warned that he would start a mass movement and legal action would also be taken if the name was not changed.
The parliamentarian said Ramdev and Balakrishna built a 'huge business empire in the country and the world by following the path shown by Maharishi Patanjali'.
"I have no objection to their empire, but is it appropriate and relevant to do business of ghee, oil, soap, spices, underwear, pants in his name?" Singh asked, wondering who gave them this right.
Singh appealed to the people of the country and the world that whenever they come to Ayodhya, they must visit Kondar.
"We want to show the whole world the condition of his birthplace of Patanjali, on whose name they eat ghee," the MP said.   -- PTI
« Back to LIVE