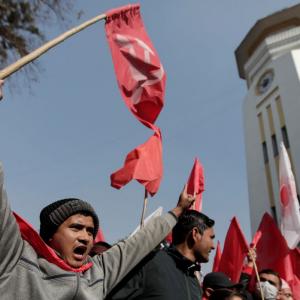 Protests in Nepal against China. File pic
China's salami-slice strategy on Nepal's northern border has resulted in the encroachment of 36 hectares of Nepal's land at 10 places on the northern border by China.
According to the survey document issued by the Ministry of Agriculture, China encroached on 36 hectares of Nepal's land at 10 places on the northern border. Similarly, the study conducted by the Ministry of Home Affairs has concluded that it is necessary to include border issues in the "state policy" of Nepal, reported Meta Khabar.
However, the world community and the Nepalis themselves are probably unaware of the magnitude of the problem. China's People's Liberation Army (PLA) built a veterinary centre for animal husbandry in 2016, located in a Nepal district, but Nepal has not responded to this.
In a February 2022 report by the UK-based media, China accused Nepal of encroaching on shared borders. According to the publication, based on official documents, China has started efforts to build canals and roads around the border post in the far western Humla district of Nepal. China was also accused of "surveillance activities in the Lalungzong border area, the Chinese border next to Nepal," reported Media Dabali.
« Back to LIVE