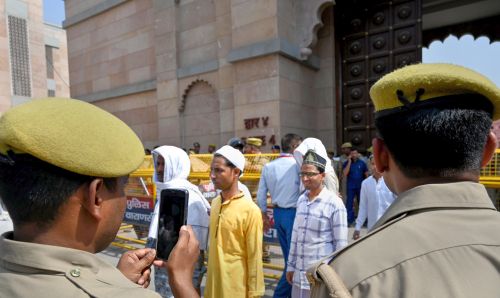 All India Majlis-e-Ittehadul Muslimen chief Asaduddin Owaisi on Saturday questioned the "silence" of Opposition parties, including the Congress and the Samajwadi Party, on the video survey of the Gyanvapi Masjid complex in Varanasi, alleging that they are keeping mum because Muslims are not their vote bank.
Owaisi said the Constitution allows Muslims to follow their culture and identity and "we would continue to do so, both at home and outside".
"Why Opposition parties like Congress, Samajwadi Party and Bahujan Samaj Party are silent on the issue of the Gyanvapi mosque? They are not saying anything because Muslims are not their vote bank," the All India Majlis-e-Ittehadul Muslimen (AIMIM) chief told an Eid Milap programme in Ahmedabad.
The Gyanvapi mosque is located close to the iconic Kashi Vishwanath temple.
A court had ordered a videography survey of the Gyanvapi Masjid complex on a suit filed jointly by five Hindu women seeking permission for daily prayers before idols on its outer walls. The survey resumed on Saturday following a local court order amid tight security arrangements, officials said.
Dubbing BJP, Congress, AAP, and Samajwadi Party "fanatic parties, Owaisi alleged they wanted Muslims to remain Muslims only at home and accept their (the parties) culture when outside.
"The Constitution of India allows you to follow your culture, your identity. We will continue to do so, both at home and outside," the Hyderabad MP said.
"I am here to tell you, and also to the government, that we have lost one Babri Masjid, but will not lose another mosque. They took away our (Babri) mosque through cunning and by murdering justice, but remember, you will not be able to snatch another mosque," Owaisi said.
He said the Gyanvapi masjid has been a mosque and will remain so.
Owaisi said the 1991 law, the Places of Worship Act, says that the religious character of a place of worship as it existed on August 15, 1947, will remain unchanged, and those attempting to change its nature and character can be jailed for three years. -- PTI
« Back to LIVE