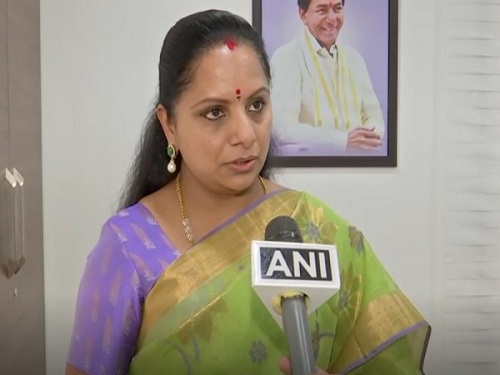 Ruling Telangana Rashtra Samithi MLC Kalvakuntla Kavitha on Saturday posed a slew of questions to Union Home Minister Amit Shah, on issues like price rise among others, on the day of his visit to the city to attend a Bharatiya Janata Party meet.
Taking to Twitter, Kavitha, daughter of Chief Minister K Chandrasekhar Rao, said Amit Shah should tell the people of Telangana as to when the Centre would "clear" the pending dues to the state.
"Shri @AmitShah Ji welcome to Telangana !! please tell the people of Telangana when will the central government clear the following ::
"Dues of Finance Comission Grants :  Over Rs 3000 crores , Backward Region Grant : Rs 1350 crore, GST Compensation: Rs 2247 crore," she noted.
The TRS leader also sought Shah's response to "skyrocketing" inflation, "record breaking" unemployment, "maximum" communal riots under BJP rule and fuel being "most expensive".
Kavitha wanted Shah to explain to the people as to why the Centre failed to sanction Telangana a single IIM, IISER, NID, medical college during the last eight years.
"Amit Shah ji , Isn't it the sheer hypocrisy of the Union Govt. to accord the National project status to Upper Bhadra project in Karnataka, Ken Betwa river linking project & denying the same for Palamuru Rangareddy Lift Irrigation Scheme & #KaleshwaramProject of Telangana?" she asked.
The ruling TRS and BJP have been engaged in a bitter  war of words for several months as they gear up for next year's assembly elections in Telangana.
Amit Shah's public meeting has been arranged to mark the culmination of the second phase of state BJP president and MP Bandi Sanjay Kumar's 'padayatra'.
« Back to LIVE