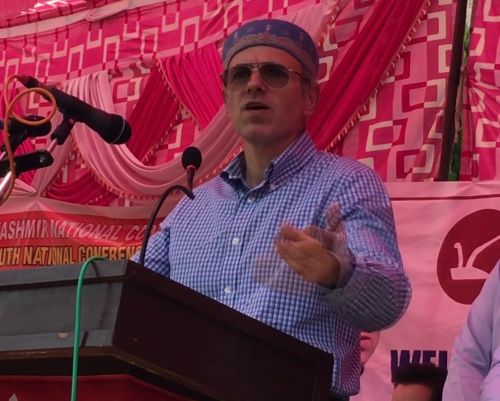 National Conference vice president Omar Abdullah on Saturday expressed concern over the "dangerous game" of polarisation "being played" in the country and claimed that even his party is being looked at with suspicion despite thousands of its workers sacrificing their lives in Jammu and Kashmir.
"The people are frightened to go outside Jammu and Kashmir because of the prevailing situation in the country, where the first person under attack is a Muslim. A dangerous game is being played by exploiting the sentiments of a particular community (against another)," Abdullah said addressing a party workers' rally in Poonch district.
Accompanied by senior NC colleagues including General Secretary Ali Mohammad Sagar and former minister Mian Altaf, Abdullah travelled from Srinagar to Poonch through the historic Mughal Road and offered prayers at 'Peer Ki Gali' shrine enroute for peace and prosperity of the people of Jammu and Kashmir.
Taking strong exception to the developments over azan (Muslim call for prayer), 'halal' meat and Hijab (head scarf) in the recent past, the former chief minister said "some people have problems with everything about Muslims" even as the Constitution treats every religion equally.
"There should be no religious difference. By pitching one religion against another, India is being destroyed," he warned.
In an apparent reference to the Bharatiya Janata Party, the NC leader said they are looking at his party with suspicion.
"We do not understand what our fault is. We linked with the country, gave numerous sacrifices as thousands of our workers and leaders were killed and those at the podium are the ones who had a narrow escape (in terror attacks)," he said.
Abdullah said the National Conference is targeted because it talks about having friendly relations with the neighbouring country.
"When it (BJP government) holds talks with them (Pakistan), there is no problem but when we advocate for dialogue (for peace in the region) we are dismissed as anti-nationals," he said and referred to the statement of former prime minister Atal Bihari Vajpayee that 'Dost Badle Ja Sakte Hain, Padosi Badle Nahi Ja Sakte' (you can change your friends but not neighbours).
"We were reminding them of the statement of Vajpayee so that there is peace on the borders and the border residents can take their livestock across the fence for grazing. War is not going to take us anywhere but friendship will," he said.
He said the NC's dialogue with the neighbouring country was its fault but wondered what happened after a prolonged hostility on the borders between the two countries.
"Today, there is a ceasefire (between India and Pakistan) along the borders. This happened when they talked with each other and agreed to silence the guns," he said. -- PTI
« Back to LIVE