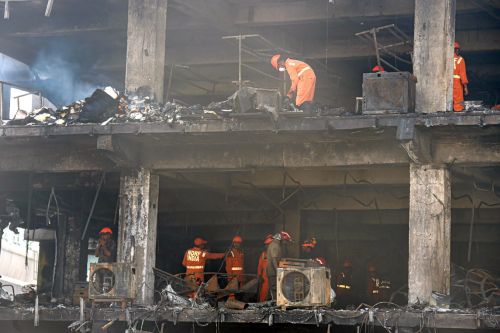 As many as 25 out of the 27 retrieved bodies from the site of a fire incident that took place in a four-story building near Mundka metro station in New Delhi have not yet been identified, according to a police official.
The National Disaster Response Force reached the spot and began the search and rescue operation last night soon after the fire incident.
"Rescue mission is on. The NDRF is checking if there are more bodies. 27 bodies have been recovered so far, but 25 of them haven't been identified. The forensic team will check DNA samples while 27-28 missing complaints have been registered," said DCP Outer District, Sameer Sharma.
Meanwhile, the ongoing search operation that began on Friday night is likely to be completed soon, according to an NDRF official.
"The search operation is going on continuously. We have found small parts of bodies on the second floor. I think the search operation would be complete in 3-4 hours," said Vikash Saini, Assistant Commandant, NDRF.
« Back to LIVE