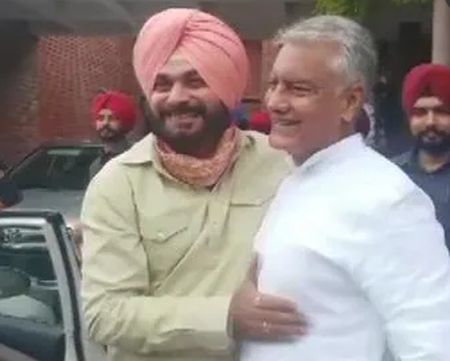 Shortly after Sunil Jakhar announced to quit the Congress, party leader Navjot Singh Sidhu on Saturday called the former state unit chief "an asset" and told his party not to lose him.
Sidhu further said any differences can be resolved on the table.
Jakhar announced his decision to part ways with the Congress that last month removed him from all party positions for alleged anti-party activities.
"The Congress should not loose #suniljakhar . Is an asset worth his weight in gold . Any differences can be resolved on the table," said Sidhu in a tweet.
Jakhar, the disgruntled leader whose decision comes during the party's three-day 'Chintan Shivir' in Udaipur, went live on his Facebook page to make the announcement.
"It is my parting gift to the party. These are my last words to Congressmen. Good luck and Goodbye Congress," Jakhar said while announcing that he was parting ways with the Congress.
The former Punjab Congress president had been upset with the party for serving him a show-cause notice on April 11. However, Jakhar chose not to reply to the Congress disciplinary committee panel.
During his 'dil ki baat' live on his Facebook page, Jakhar also attacked some leaders "sitting in Delhi" and particularly targeted party leader Ambika Soni for her statement made last year in which she had the party should go with a Sikh face
Notably, AICC incharge of Punjab affairs Harish Chaudhary had written to party president Sonia Gandhi, seeking disciplinary action against Navjot Sidhu for trying to "portray himself above the party." -- PTI
« Back to LIVE