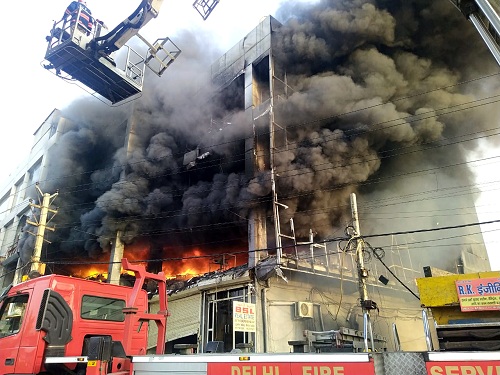 Hours after the Delhi fire tragedy came under control, the police said the commercial building that caught fire near Mundka metro station on Friday evening did not have fire the mandatory no-objection certificate while also informing that the building owner is absconding.
The police official said that the building owner has been identified as Manish Lakra.
"The building did not have a fire NOC. The owner of the building has been identified as Manish Lakra who lived on the top floor. Lakra is currently absconding, teams are on the job and he will be nabbed soon," DCP Sameer Sharma (outer district) told reporters.
As many as 27 people died in the fire accident so far and 12 persons are injured, police said.
"A total of 27 people have died and 12 are injured. We'll take the help of the forensic team to identify the bodies. FIR has been registered. We've detained company owners. There are chances that more bodies may be recovered as the rescue operation is yet to be completed," he added.
Meanwhile, the divisional officer of the fire department also informed that there was only one staircase due to which, people could not move out of the building. -- ANI
« Back to LIVE