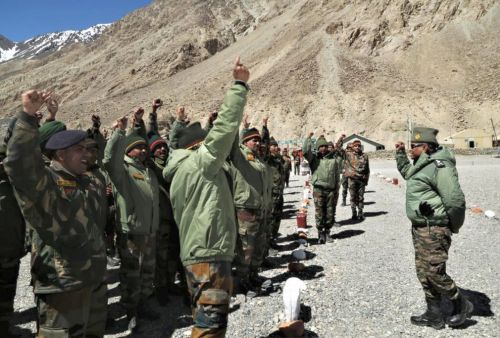 Army Chief Gen Manoj Pande visited some of the most difficult and inhospitable forward locations in eastern Ladakh and reviewed India's overall military preparedness during his three-day tour of the region amid the lingering border row with China, officials said on Saturday.
They said the Chief of Army Staff interacted with the troops in multiple locations along the Line of Actual Control in the high-altitude region and took stock of the ground situation.
Gen Pande concluded his three-day visit to Ladakh on Saturday.
The Army chief, accompanied by senior commanders, visited some of the most difficult and inhospitable forward locations in eastern Ladakh to have first-hand knowledge about the prevailing situation, the officials said.
"General Manoj Pande #COAS visited forward areas in #Ladakh to review the operational preparedness. #COAS interacted with the troops & complimented them for their steadfastness & high morale," the Army tweeted.
On Thursday, senior commanders briefed Gen Pande at the Fire and Fury Corps headquarters in Leh about the overall security situation in eastern Ladakh.
The Fire and Fury Corps is responsible for guarding the LAC with China in the Ladakh region.
Gen Pande's visit to Ladakh came days after he said China's intention has been to keep "alive" the overall boundary question with India though it remains the "basic" issue between the two countries.
While referring to the eastern Ladakh border row, the Army chief had said the Indian Army's aim is to re-establish the "trust and tranquillity" between the two sides but asserted that "it cannot be a one-way affair".
He also asserted that the Indian Army's aim was to restore the status quo ante prior to April 2020 in eastern Ladakh.
The eastern Ladakh faceoff began on May 4-5 in 2022. India has been insisting on the restoration of the status quo ante prior to the standoff.
India and China have held 15 rounds of military talks so far to resolve the eastern Ladakh row. As a result of the talks, the two sides completed the disengagement process last year on the north and south banks of the Pangong lake and in the Gogra area.
India has been consistently maintaining that peace and tranquillity along the LAC were key for the overall development of the bilateral ties.
Each side currently has around 50,000 to 60,000 troops along the Line of Actual Control in the sensitive sector. -- PTI
« Back to LIVE