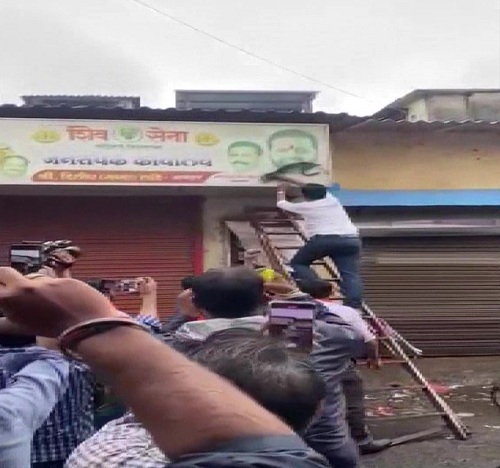 Poster of Shiv Sena MLA Dilip Lande, who is currently in Guwahati with rebel leader Eknath Shinde, being smeared with ink in Mumbai/ANI
Shiv Sena workers on Friday vandalised a board outside the office of party MLA Mangesh Kudalkar who is part of the group of rebel legislators led by senior Maharashtra minister Eknath Shinde, the police said.
Kudalkar represents the Kurla assembly constituency in the city.
He is camping in Guwahati along with Shinde and other Sena MLAs who have rebelled against Maharashtra Chief Minister Uddhav Thackeray.
A group of Shiv Sena supporters gathered outside Kudalkar's office in Nehrunagar area of Kurla and tried to smash up a board bearing his name and photograph, said a police official.
Before they could attack the MLA's office, police personnel on the spot intervened, following which they dispersed, he added.
Mumbai police have stepped up security at several locations including Shiv Sena shakhas (local offices) in the city to prevent any untoward incident following Shinde's rebellion. -- PTI
« Back to LIVE