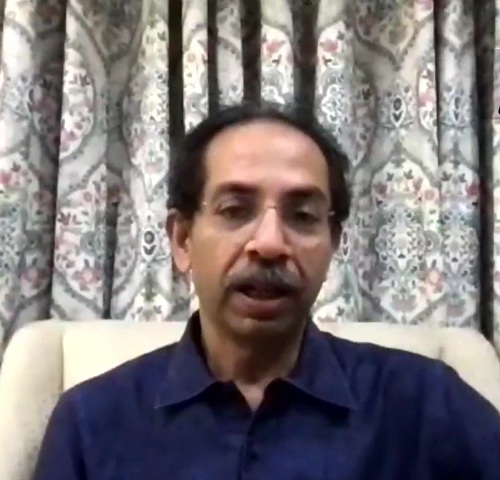 Maharashtra Chief Minister Uddhav Thackeray on Friday said that even as Congress and Nationalist Congress Party are supporting the Shiv Sena in the ongoing crisis, its own people betrayed the party.
"Many of you might be getting phone calls -- some loving and some threatening. I say, har sher ko sava sher milta hi hai. You'll find sava sher in Shiv Sena. Shiv Sena like a sword, if you keep it in sheath, it rusts. If you take it out, it shines. It's time to shine," said Thackeray while addressing partymen.
He said that Congress and the NCP are supporting the Shiv Sena today.
Sharad Pawar and Sonia Gandhi have supported it.
"But our own people have backstabbed us. We gave tickets to people who could not have won and we made them victorious. Those people have backstabbed us today,' he said.
Thackeray said that when the BJP and Shiv Sena were considered untouchables in the name of Hindutva and nobody was ready to go with the BJP, Balasaheb said there shouldn't be a division of Hindutva votes.
"We remained with the BJP and we are suffering its consequences now,' he said.
The Maharashtra CM said that those who left the Sena have no option but to go to the BJP.  The BJP wants just one thing -- to finish Shiv Sena, added Thackeray.
"If you think I'm useless and incapable of running the party, tell me. I'm ready to separate myself from the party, you can tell me. You respected me so far because Balasaheb said so. If you say I am incapable, then I am ready to quit the party right at this moment,' said Thackeray. -- ANI
« Back to LIVE