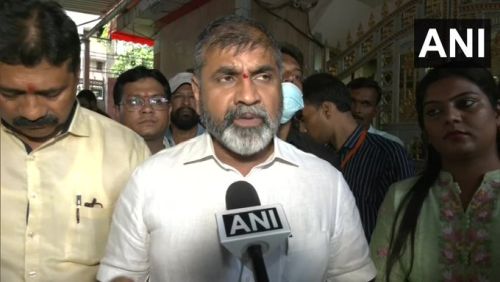 Shiv Sena leader Sachin Ahir
Maharashtra CM Uddhav Thackeray's address to his district leaders seems to have galvanised the party.
"Today we had a party meeting with district leaders. After CM Uddhav Thackeray's speech, party leaders got energy. MLAs may not be here, but the party is intact. Party's full base is there and with this spirit, we will fight," Shiv Sena leader Sachin Ahir said.
As Eknath Shinde appears to be tightening his grip on the Shiv Sena with the number of rebels rising to 38, Uddhav Thackeray called a meeting of the party's district chiefs today where he said that he left the Varsha Bungalow but not the "will to fight".
"I have said it earlier also that I don't have anything to do with power. The people who used to say that they would rather die than leave Shiv Sena have fled today," the Shiv Sena chief said during his virtual address at the meeting.
"The rebel MLAs want to break the party. I had never thought in dreams that I would become the chief minister. I have left Varsha Bungalow but not the will to fight," he added.
"I did everything for Eknath Shinde. I gave him the department which I held. His own son is an MP and comments are being made regarding my son. A lot of allegations are levelled against me," he said.
"If they have courage, they should go among people without taking Balasaheb & Shiv Sena's names," he added. Thackeray, who underwent a cervical spine surgery last year, said, "I had pain in my neck and head, I was not able to work properly, I could not open my eyes but I did not care about it. Shivaji Maharaj was defeated but people were always with him."
« Back to LIVE