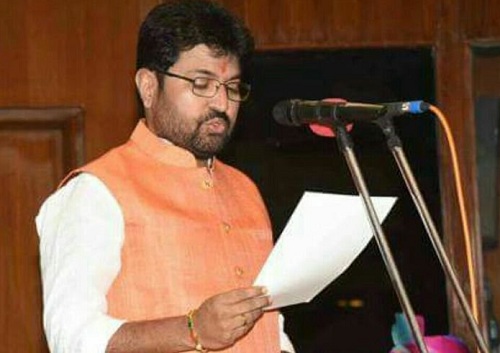 Arjun Khotkar/Twitter
The Enforcement Directorate on Friday attached over 200 acres of land and other assets worth a total Rs 78.38 crore of a Jalna-based sugar mill linked to Shiv Sena leader and former party MLA Arjun Khotkar in connection with the alleged Maharashtra State Cooperative Bank scam-linked money laundering probe.
Apart from the land, plant, machinery and building belonging to the Jalna Sahakari Sakhar Karkhana Ltd. located at Sawargaon Hadap village in the said district have been attached after the agency issued a provisional order under the Prevention of Money Laundering Act, the ED said in a statement.
The assets of Jalna SSK are "currently held in the name of Arjun Sugar Industries Pvt. Ltd., a company incorporated by Arjun Khotkar and others on May 8, 2012 only with a view to purchase the Jalna SSK Ltd," the federal probe agency said.
Sixty-year-old Khotkar has been a Shiv Sena party MLA from Jalna and has also served as a minister in the Maharashtra government.
He is considered close to party supremo and Maharashtra Chief Minister Uddhav Thackeray.
The ED last year had similarly attached assets worth Rs 65 crore of a Satara-based sugar mill in the MSCB scam case and had said that a company linked to state deputy chief minister and NCP leader Ajit Pawar and his wife were involved in the case.
The MSCB money laundering case stems from an August, 2019 FIR of the Mumbai police economic offences wing.
The police complaint came after the Bombay high court issued an order on August 22 that year to investigate the allegations of selling sugar factories in the Maharashtra cooperative sector through alleged fraudulent means and also that they were sold at throw-away prices.
The ED probe found that the "fraudulent mode and manner in which the bidding process was followed for sale of SSK and subsequent distribution of assets of SSK among family-based business entities of the members of the MSCB indicates sale of SSK".
"Hence, the properties of the said SSK which includes government land of 100 acre, plant and machinery, building, structure which was acquired illegally (now owned by Arjun Sugar Industries Pvt. Ltd) are proceeds of crime." -- PTI
« Back to LIVE