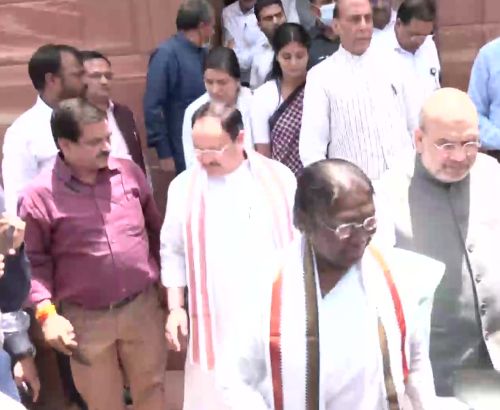 Update: The BJP-led NDA's nominee Droupadi Murmu on Friday filed her nomination papers for the July 18 presidential election, with Prime Minister Narendra Modi handing over the set of papers to Returning Officer P C Mody.
Murmu was also accompanied by union ministers Amit Shah, Rajnath Singh, Nitin Gadkari and Piyush Goyal, BJP president J P Nadda and several chief ministers including Yogi Adityanath, Shivraj Singh Chouhan, Manohar Lal Khattar, B S Bommai, Bhupendra Patel, Himanta Biswa Sarma, Pushkar Singh Dhami, Pramod Sawant and N Biren Singh.
Besides the NDA leaders, YSR Congress' V Vijaysai Reddy and BJD leader Sasmit Patra, who are not part of the alliance, were also in Parliament to back her nomination.
AIADMK leader O Paneerselvam and M Thambidurai, JD-U's Rajiv Ranjan Singh also reached Parliament early. Every set of nomination has to have 50 proposers and 50 seconders among elected representatives. Murmu, if elected, will be the first tribal president and the second woman in the post.
She will also be the youngest president ever, second only to N Sanjeeva Reddy, who was a few days elder to her when he became the President. PTI
Also read: The Many Firsts Of Droupadi Murmu
« Back to LIVE