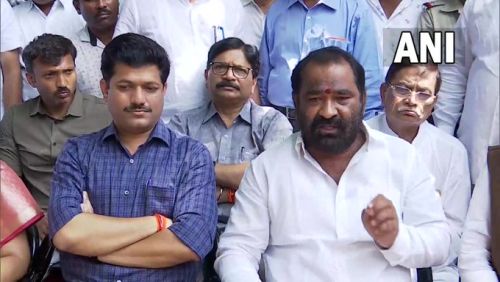 Shiv Sena MLA Nitin Deshmukh on his 'escape' from the lair of the rebel MLAs. "We were forcibly taken to Surat, I tried to run away but was caught by Surat police. Despite having no complications, doctors told me that I had a heart attack. 300-350 police personnel were keeping an eye on us.
"Before me, MLA Prakash Abitkar tried to get away from them but he could not. We got to know about the conspiracy against the MVA govt as soon as we reached Surat's hotel."
Deshmukh, who arrived at Guwahati early yesterday morning in a chartered aircraft from Surat, did not accompany Maharashtra's rebel minister Eknath Shinde and other MLAs to a Guwahati hotel where his colleagues were lodged.
After remaining at Guwahati's Lokapriya Gopinath Bordoloi international airport for a few hours, Deshmukh, along with five Shiv Sena activists, left for Nagpur in another chartered aircraft.
Read more here
« Back to LIVE

Gokulam Kerala FC players, who were to participate in the AFC Women's club championships, are stranded at Tashkent following AIFF's suspension by FIFA on Monday.

In a statement, the DGCA said it will be conducting "random checks" in aircraft across the country to see if the COVID-19 protocol is being enforced or not.

All the convicts belonged to outlawed Jama'atul Mujahideen Bangladesh.

The Congress on Wednesday said senior party leader Ghulam Nabi Azad was consulted several times before finalising the names in the revamped Jammu and Kashmir unit of the party, rejecting reports that the former Union minister was not on...