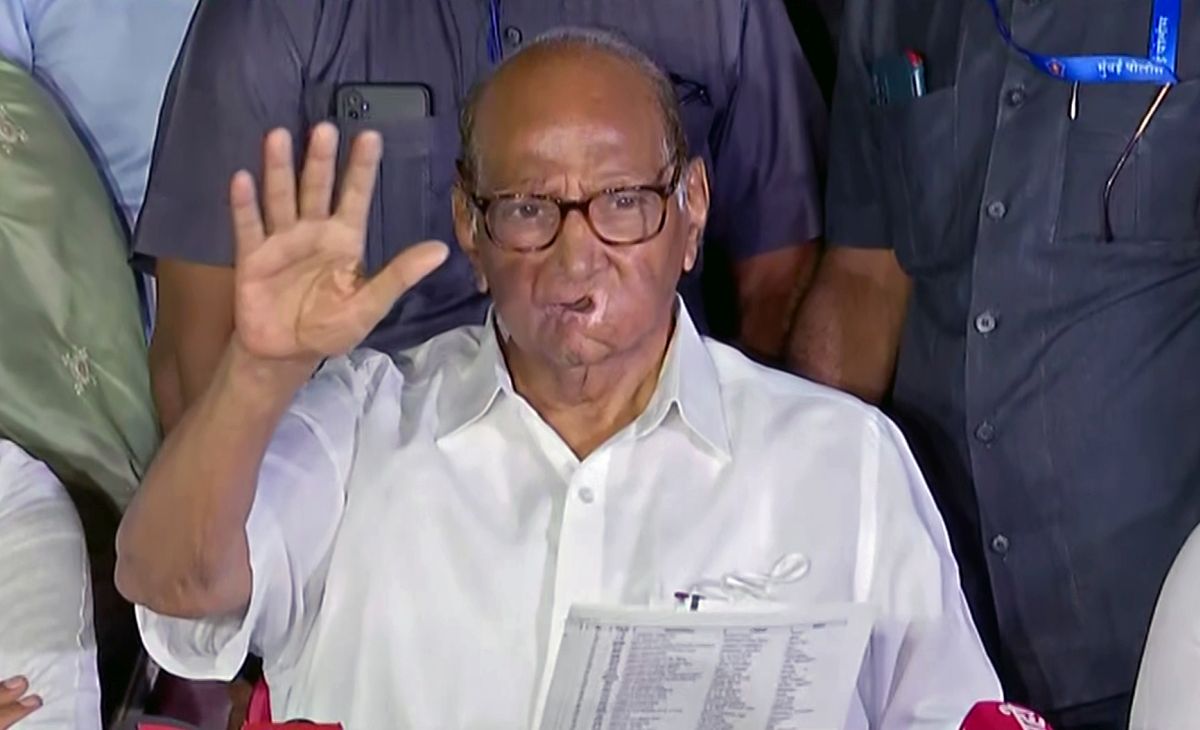 Nationalist Congress Party president Sharad Pawar on Thursday said the fate of the Maha Vikas Aghadi government in Maharashtra will be decided on the floor of the Legislative Assembly, and the Shiv Sena-NCP-Congress coalition will prove its majority in a trust vote.
Addressing a press conference amid the turmoil caused by the rebellion by Sena minister Eknath Shinde and several Sena MLAs, Pawar also asserted that the Bharatiya Janata Party has played a role in the crisis that has befallen the Uddhav Thackeray-led government.
"The fate of the MVA government will be decided in the Assembly, not in Guwahati (where the rebels are camping). The MVA will prove its majority on the floor of the House," Pawar said.
He was replying to a question whether the MVA has been reduced a minority as the Shinde-led rebel faction has claimed the support of 37 Shiv Sena MLAs and ten Independent legislators.
Asked about deputy chief minister Ajit Pawar's statement that he did not see the Bharatiya Janata Party's role in the rebellion within the Sena, Pawar said he did not agree with his nephew.
"Ajit Pawar may have said so because he does not know BJP leaders from outside Maharashtra. I know them. Even Eknath Shinde has said a national party has assured him of all assistance," Pawar said.
As other national parties like the Bahujan Samaj Party, the Communist Party of India-Marxist, the Communist Party of India, the Congress and the NCP have no role to play in destabilising the MVA, Shinde was referring only to the BJP, he said.
The rebel MLAs will have to come back to Mumbai and face the Assembly, he said, adding that BJP leaders 'from Gujarat and Assam will not be coming here to guide them'.
Pawar also refuted allegations by rebel Shiv Sena MLAs that they faced difficulties in getting funds for their constituencies as the finance ministry, which is controlled by NCP's Ajit Pawar, discriminated against them, and the Sena has given up its Hindutva ideology.
"All these are excuses, some of these MLAs are facing probe by central agencies," he said.
The NCP chief also said that the rebels will have to face consequences, recalling that when Chhagan Bhujbal defected from the Shiv Sena to join Congress in the 1990s, all his supporters except one lost the assembly election.
''These rebels will face the same fate," Pawar said.
On Shiv Sena leader Sanjay Raut's Thursday's statement that the Sena was ready to quit the MVA if the rebels relented, Pawar said the statement was made to bring them back to Mumbai.  -- PTI
« Back to LIVE