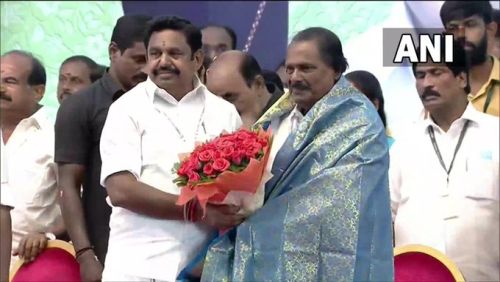 Tamil Magan Hussain elected as the AIADMK Presidium Chairman
AIADMK Coordinator O Panneerselvam on Thursday walked out of the party's General Council meeting in Chennai after it stuck to the single leadership demand and favoured his rival and party Joint Coordinator Edappadi K Palaniswami (EPS).
As EPS was honoured with a decorated crown, a sword and sceptre by supporters amid chants favouring him, OPS along with his supporters including Deputy Secretary R Vaithilingam moved out of the hall and left the premises.
The GC meet, that witnessed chaotic scenes was over within 40 minutes after it started. B Valarmathi, a senior office-bearer and a former Minister sung a song from party founder M G Ramachandran's movie and said, 'a leader will emerge' apparently hailing EPS.
The GC meet, which stuck to the one and only demand of making EPS the supreme party leader, turned out to be a full show of strength of the Palaniswami camp with OPS followers heavily outnumbered.
OPS, as Panneerselvam is known, was seated close to EPS on the dais when the GC burst into the single leadership chorus. The party announced that the GC would again meet on July 11. PTI
« Back to LIVE