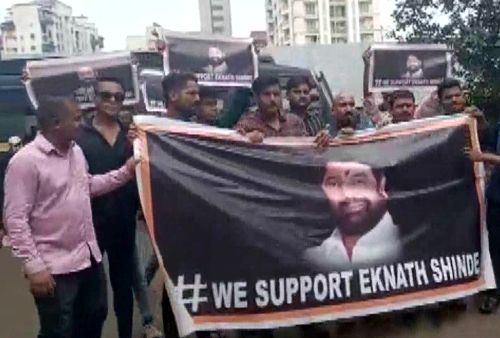 Eknath Shinde with his MLAs in Guwahati
Uddhav Thackeray loyalist, Sanjay Raut plays at heartstrings. "He who leaves the party under ED pressure is not a true Balasaheb Bhakt. We're true Balasaheb Bhakts.. Even we are under ED pressure but will continue to stand with Uddhav Thackeray. When floor test happens everyone will see who's positive and who is negative," Sanjay Raut said.
"I won't talk about any camp, I will talk about my party. Our party is strong even to this day. About 20 MLAs are in touch with us. When they come to Mumbai, you will get to know under what circumstances or pressure these MLAs left us," Raut said.
Tally of MLAs with Eknath Shinde: A total of 42 Maharashtra MLAs are present with Eknath Shinde at Radisson Blu Hotel in Guwahati, Assam. This includes 34 MLAs from Shiv Sena and 8 Independent MLAs.
After reaching Guwahati on Wednesday, Shinde has claimed the support of 46 legislators, including some Independents.
He had given a letter to the Maharashtra Legislative Assembly's deputy speaker, signed by 35 Sena MLAs, replacing Sunil Prabhu with Bharat Gogavale as the chief whip of the Shiv Sena legislature party.
Shinde has maintained that while the NCP and the Congress were growing stronger in the MVA alliance, the Shiv Sena, which heads the governing bloc, and its workers were getting systematically weakened.
« Back to LIVE