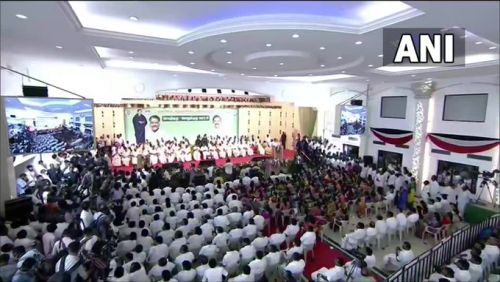 AIADMK General Council meeting
The AIADMK General Council meeting in Chennai on Thursday rejected all the 23 proposed resolutions and announced that the one and only demand of GC members is to bring in a system of a single leadership for the party, favouring Joint Coordinator Edappadi K Palaniswami.
As soon as the meet commenced amid chaotic scenes of sloganeering, the process of passage of already decided resolutions were taken up.
The first of them was proposed by Coordinator O Panneerselvam and seconded by Palaniswami, who addressed the former as 'brother' in his brief remarks. Soon, senior leader C Ve Shanmugam who was recently elected to the Rajya Sabha announced that all resolutions "are rejected by the General Council."
Deputy Secretary K P Munusamy said all the GC members have rejected all the 23 proposed resolutions. "Their one and only demand is for a single leadership." When such a resolution favouring a single leadership (favouring EPS) is taken up and passed, all other resolutions would be adopted as and when the GC is convened in future, he added. PTI
« Back to LIVE

Vets and animal experts from FOUR PAWS International, a global animal welfare organisation, performed a dental procedure on Madhubala, a 16-year-old elephant, at the zoo in Karachi.