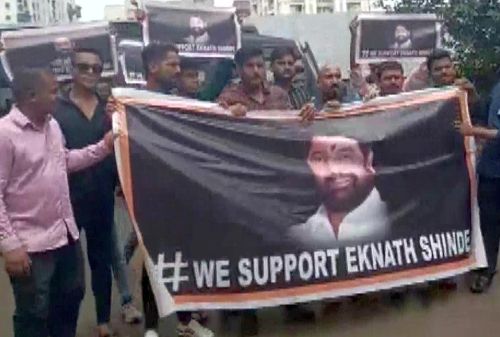 Three more Shiv Sena's rebel MLAs have reached Radisson Blu Hotel in Guwahati amid political instability in the ruling Maha Vikas Aghadi government in Maharashtra
A group of rebel Maharashtra MLAs, led by Eknath Shinde, was flown to Guwahati on Wednesday morning.
They were taken to Surat from Mumbai on Tuesday and in the early hours of Wednesday, they were shifted to Guwahati.
« Back to LIVE

The Aga Khan Museum in Toronto has said it "deeply regrets" causing offence to members of the Hindu and other faith communities and has removed the presentation of the documentary Kaali, after the Indian mission in Ottawa urged the...

What are Vidya Balan and her family celebrating?

Fresh holes dug ahead of new funerals sit next to dozens of recent graves, many of which have been filled by those who have died since Russia invaded Ukraine four months ago, in the Walk of Heroes section of the cemetery in Kharkiv.

As the rains flood Mumbai, disrupting the flow of life and the momentum of traffic in the city that never sleeps, Mumbaikars will be relieved to know that the Powai lake, which supplies some of the city's water needs, is overflowing.