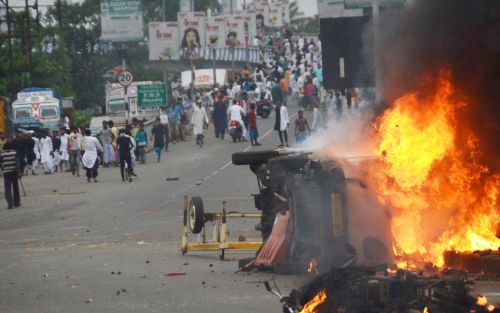 The West Bengal government on Saturday effected a police reshuffle in Howrah district, which witnessed violent protests over controversial remarks on Prophet Mohammad by suspended Bharatiya Janata Party spokespersons.
The state administration named Praveen Tripathi, Additional CP of Kolkata Police, the new Commissioner of Police of Howrah City, an order stated.
Swathi Bhangalia, DCP (South West) of Kolkata Police, was made the new SP of Howrah (Rural), it added.
Howrah City Commissioner of Police C Sudhakar was made the Joint CP of Kolkata Police while Howrah (Rural) SP Saumya Roy was made DCP (South West) of Kolkata Police.
The decision was taken during an emergency meeting held in the state secretariat over the current situation in Howrah district.
"These appointments have been initiated in the interest of public service," the order stated.
Protests erupted in several parts of Howrah district on Friday over controversial remarks by suspended BJP spokesperson Nupur Sharma and expelled leader Naveen Jindal on Prophet Mohammad.
Agitators resorted to stone-pelting, setting police vehicles on fire and damaging public property during violent protests and clashes with the law enforcers in the district.
Internet services have been suspended across the district till June 13 to prevent the spread of rumours and prohibitory orders under Section 144 of CrPC imposed in several areas such as Uluberia, Domjur and Panchla till June 15.
Fresh violence was reported in Panchla Bazaar area in the district on Saturday as protesters clashed with the police and several houses were set on fire. Agitators pelted policemen with stones, injuring some of them, and also vandalised a BJP party office. -- PTI
« Back to LIVE