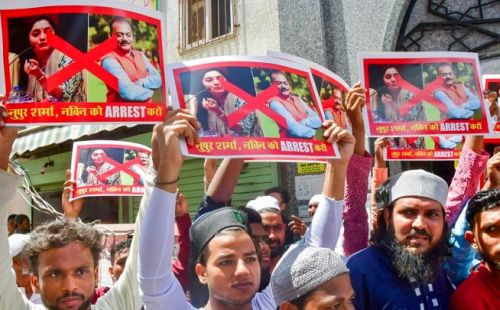 Muslims protest over Prophet remarks
Amid protests over the remarks against Prophet Mohammad by two now-suspended Bharatiya Janata Party functionaries, a senior leader of the ruling Awami League has said that the Bangladesh government is under pressure to take "action" as events in India have consequences in this country.
Khandakar Goulam Moula Naqshbandi, Chairman of the Religious Affairs Sub-Committee of the ruling Awami League and a member of the Advisory Committee, also said that disruptive forces try to take advantage of such a situation to disturb law and order in Muslim majority Bangladesh.
"Many issues arise due to conspiracy at the international level and petty politics at the local level, but the situation worsens if immediate action was not taken, Naqshbandi said while talking to a group of Indian journalists here.
"Bangladesh is under pressure from clerics and civil society to take action over the remarks against the Prophet," he said, adding that Prime Minister Sheikh Hasina knows how to deal with the situation.
Naqshbandi said that Bangladesh has good relations with India, which is a friendly country.
He said that the particular incident is prima facie an internal matter of India, but "such incidents affect the people here (in Bangladesh)."
On Friday, hundreds of people took to the streets in several major cities in Bangladesh, protesting against the controversial remarks made by two former BJP spokespersons against the Prophet. The protesters rallied after Friday prayers, chanting slogans and demanding that the Bangladesh government condemn the derogatory comments and boycott Indian products in the Muslim majority country.
Naqshbandi said that such statements should be avoided as they can hurt the sentiments of anyone.
Despite the expulsion of Naveen Jindal and suspension of Nupur Sharma and FIR against them by the BJP in the case, Naqshbandi said it was a late move and the step was taken after the protests from Arab countries.
"The (Bangladesh) government is assessing the situation," he said.
When asked whether the Committee on Religious Affairs will give any advice to the Hasina government in this matter, Naqshbandi said, "We have discussed this with the minister in-charge and after further discussion, we will issue a statement."
He said that India and Bangladesh have very close relations and it is also true that many international powers are trying to spoil the relations between the two countries. -- PTI
« Back to LIVE