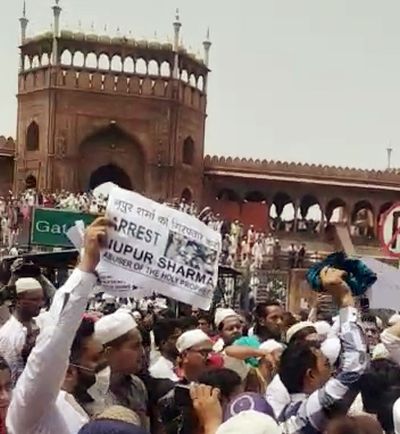 Police have registered a case in connection with Friday's protest outside Jama Masjid to demand the arrest of suspended Bharatiya Janata Party spokesperson Nupur Sharma for her controversial remarks on Prophet Mohammad, officials said on Saturday.
After the Friday prayers, a large crowd of people had gathered on the steps of the famous mosque, carrying placards and shouting slogans against Sharma and Naveen Jindal, former head of the Delhi BJP's media unit, for allegedly making derogatory remarks on the Prophet.
Deputy Commissioner of Police (Central) Shweta Chauhan said a case has been registered under section 188 (disobedience to order duly promulgated by public servant) of the Indian Penal Code on Friday against the protesters and further investigation is underway.
On Friday, the DCP had said, "Around 1,500 people had gathered at the mosque for Friday prayers. When the prayers ended peacefully, some people came outside, started showing placards and shouted slogans. Some others also joined them later and the numbers went up to around 300."
"Police deployment always remains at Jama Masjid during Friday prayers. The protesters were dispersed within 10 to 15 minutes and the situation is peaceful. Legal action will be taken in connection with the incident. We have identified some of the miscreants and our teams are working to identify others," Chauhan said.
Shahi Imam of Jama Masjid, Syed Ahmed Bukhari, had distanced himself from the protest, saying "nobody knows who the protesters were" and demanded action against such people.
The row over the remarks against Prophet Mohammad escalated on Sunday with protests from countries such as Saudi Arabia, Kuwait, Qatar and Iran, prompting the BJP to suspend Sharma and expel Jindal as the party asserted that it respects all religions.
« Back to LIVE