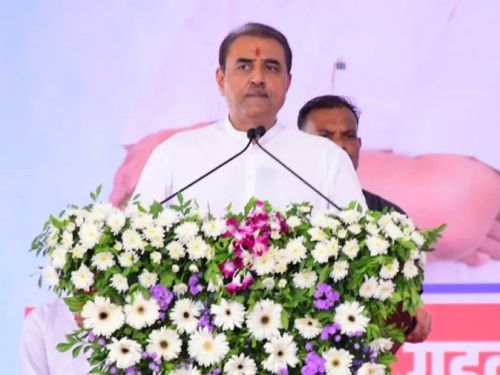 Senior Nationalist Congress Party leader and newly-elected Rajya Sabha MP Praful Patel on Saturday said not a single MLA from the NCP, the Congress and the Shiv Sena cross-voted in the Rajya Sabha elections for six seats from Maharashtra, which saw the defeat of Shiv Sena's second nominee against his Bharatiya Janata Party challenger.
Prima facie, the Maha Vikas Aghadi -- comprising the Shiv Sena, the NCP, and the Congress -- failed to secure four-five votes of Independent MLAs, he told reporters at Nagpur airport.
Ruling out cross-voting in the keenly-contested elections, Patel said all the MLAs of the NCP, the Congress, and the Shiv Sena voted as per the party line.
"There was not a single cross-voting from the MLAs of these three parties," he said.
When asked why the MVA failed to get Sena's second nominee Sanjay Pawar elected on the sixth seat, the former Union minister pointed to a combination of factors, including invalidation of the vote of an MLA (of Shiv Sena).
"Moreover, NCP leaders Nawab Malik and Anil Deshmukh couldn't vote (as they failed to get relief from the Bombay high court). If we put all these things together, along with the votes cast by Independents and MLAs of small parties, there is a difference (shortfall) of four to five votes (in the MVA tally). We may not have got votes of four to five Independents contrary to our expectations," he added.
BJP candidates -- Union minister Piyush Goyal, former state minister Anil Bonde and Dhananjay Mahadik -- won the fiercely-fought elections, results of which were declared in the early hours of Saturday.
Shiv Sena's Sanjay Raut, NCP's Praful Patel and Congress' Imran Pratapgarhi also came out victorious.
The contest was for the sixth seat -- between BJP's Mahadik and Sena's Pawar, who lost.
The quota of the first preferential votes per contestant was 41.
Of the total 288 MLAs in the Maharashtra Assembly, 285 voted- barring Deshmukh and Malik who are in jail in different money laundering cases while one seat is lying vacant due to the death of an MLA.
The poll panel directed the Rajya Sabha election returning officer of Maharashtra to reject the vote cast by Shiv Sena legislator Suhas Kande, after which the counting of votes got underway after 1 am. -- PTI
« Back to LIVE