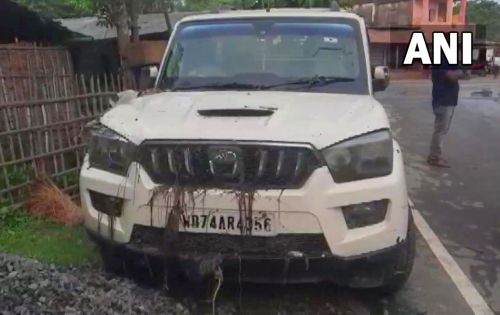 At least eight people were killed and two others injured when the SUV they were travelling in lost control and fell into a roadside ditch in Bihar's Purnea district on Saturday, officials said.
The local administration is trying to ascertain the identity of the deceased.
"The accident took place around 3 AM on Saturday when the car occupants were going to Nania village in Kishanganj district after attending a 'tilak' ceremony (initial function of a wedding) in Tarabadi area of Purnea district.
"The driver lost control over the vehicle and it fell into a water-filled ditch beside Purnea-Kishanganj State Highway near Kanjia Middle School," Baisi Sub-divisional Magistrate Kumari Toushi said.
Eight people died on the spot and their bodies were sent for post-mortem examination, while the two injured were admitted to a nearby hospital where their condition is stated to be stable.
Kanjia Panchayat Mukhiya Samrendra Ghosh told reporters that all the deceased are males.
"The local administration will soon ascertain their identity and the exact cause of the accident," Circle Officer Raj Shekhar said. -- PTI
« Back to LIVE