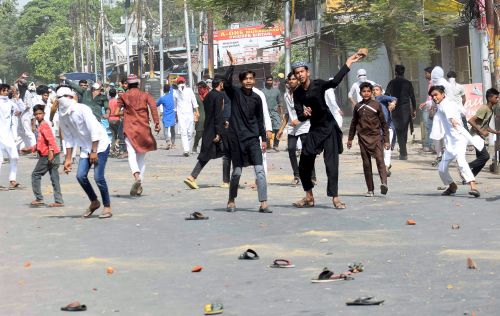 A total of 227 people were arrested from various districts of Uttar Pradesh in connection with Friday violence, a senior police official has said.
In a statement issued on Saturday, Additional Director General of Police (Law and Order) Prashant Kumar said, "227 persons have been arrested in the state for Friday violence. This includes 68 in Prayagraj, 50 in Hathras, 48 in Saharanpur, 28 in Ambedkarnagar, 25 in Moradabad, and eight in Firozabad."
People pelted stones at police personnel in Prayagraj and Saharanpur as people took to rowdiness during their protests after Friday prayers.
At least four other cities witnessed similar scenes during the marches that were carried out to decry the offensive remarks on Prophet Mohammad made by now-suspended BJP spokesperson Nupur Sharma.
In Prayagraj, the mob set on fire a few motorcycles and carts and also attempted to set ablaze a police vehicle. Police used tear gas and lathis to disperse the mobs and restored peace, police said. One police personnel got injured by  mob, they said.
Nupur Sharma was suspended by her party after several Islamic nations denounced her comment against the Prophet during a TV debate.
In Saharanpur, protesters shouted slogans against Sharma and demanded death sentence for her.
There were protests in Bijnor, Moradabad, Rampur, and Lucknow. Sloganeering took place in Lucknow.
According to the local people, stone pelting continued for over 15 minutes in Prayagraj. They said a few protesters threw stones at the police team deployed on the main road. -- PTI
« Back to LIVE