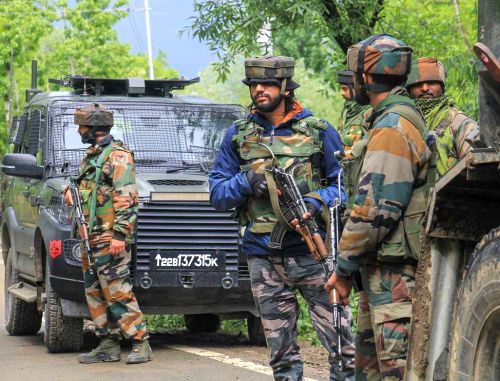 Two Lashkar-e-Taiba terrorists, including one from Pakistan, were killed in an encounter with security forces in the Kupwara district of Jammu and Kashmir on Tuesday, police said.
Based on information about the presence of terrorists in the Chaktaras Kandi area of Kupwara, security forces launched a cordon and search operation, a police official said.
The search operation turned into an encounter after the militants fired upon the security forces who retaliated, he said.
In the exchange of fire, two militants were killed, the official said.
Inspector General of Police, Kashmir, Vijay Kumar said one of the slain militants was a Pakistani, identified as Tufail.
"Two terrorists of proscribed terror outfit LeT, including one Pakistani terrorist namely Tufail, killed. Search still going on," the IGP tweeted.
« Back to LIVE