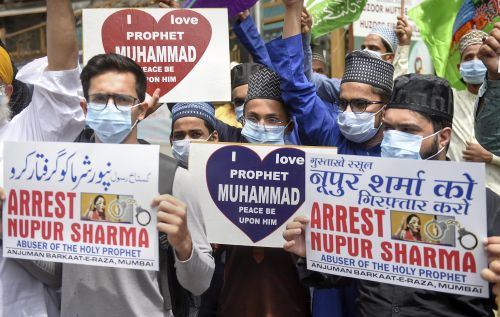 Amid sharp reaction from several Muslim nations over remarks by Bharatiya Janata Party leaders against Prophet Mohammed, a spokesperson for United Nations Secretary-General Antonio Guterres has said that "we strongly encourage respect and tolerance for all religions."
The spokesperson was responding to a question by a Pakistani journalist on the condemnation by several Muslim nations over remarks by BJP's former national spokesperson Nupur Sharma and its Delhi media head Naveen Kumar Jindal against the Prophet and the Secretary General's response to it.
"I've seen stories. I haven't seen the remarks themselves, but I mean, regardless, I can tell you that we strongly encourage respect and tolerance for all religions," Stephane Dujarric, Spokesman for the Secretary-General, said on Monday at the daily press briefing.
The BJP on Sunday suspended Sharma and expelled Jindal as the row over their remarks against the Prophet escalated with protests from many Muslim countries.
Amid demonstrations by Muslim groups and the sharp reaction from countries like Kuwait, Qatar and Iran, the BJP had issued a statement asserting that it respects all religions and strongly denounces insults of any religious personality.
Seeking to defuse a diplomatic row, spokespersons of the Indian Embassy in Qatar and Kuwait said on Sunday that the Ambassadors have "conveyed that the tweets do not, in any manner, reflect the views of the Government of India. These are the views of fringe elements."
Indonesia, Saudi Arabia, the UAE, Jordan, Bahrain and Afghanistan and the Maldives on Monday joined several Muslim nations to condemn the controversial remarks of BJP leaders against Prophet Mohammed, stressing the importance of respecting all religious beliefs.
« Back to LIVE