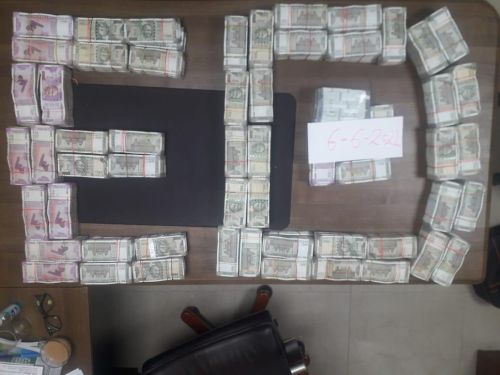 The cash the ED says it seized from the Delhi minister
"Unexplained" cash of Rs 2.85 crore and 133 gold coins were seized after raids were conducted at the premises of Delhi minister Satyendar Jain and his alleged associates as part of a money laundering probe against them, the ED said Tuesday.
The Enforcement Directorate (ED) said those raided on Monday "either directly or indirectly assisted (the minister) or participated in the process of money laundering".
The cash and coins were "unexplained" and were kept in a "secret" place, it said in a statement. Jain, 57, was arrested on May 30 under the criminal sections of the Prevention of Money Laundering Act (PMLA) and is in ED custody till June 9.
The ED had conducted searches at about 7 premises, including that of a jeweller, in Delhi and some neighbouring locations on Monday. Jain, a minister without portfolio in the Arvind Kejriwal government, is being probed by the federal agency under the PMLA on charges of alleged hawala dealings.
Kejriwal recently had defended Jain as a "hardcore honest and patriot" person who was being framed in a "false case" and hoped the minister will come out clean after the ED probe.
The agency said those raided include Jain's wife Poonam Jain, his business associates Ankush Jain and Vaibhav Jain, Naveen Jain and Siddharth Jain (directors of Ram Prakash Jewellers Pvt Ltd), G S Matharoo (chairman of Lala Sher Singh Jivan Vigyan Trust which runs Prudence group of schools), Yogesh Kumar Jain (director in Ram Prakash Jewellers Pvt Ltd.), father-in-law of Ankush Jain and Lala Sher Singh Jivan Vigyan Trust. -- PTI
« Back to LIVE