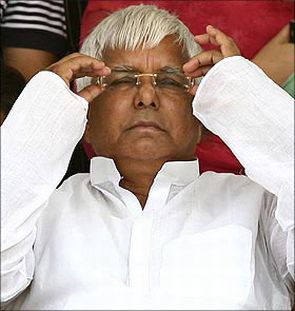 RJD chief Lalu Prasad had a narrow escape on Tuesday morning as a fire that broke out in a room of the circuit house in Jharkhand's Palamu district where he was staying could be doused in time, officials said.
Prasad, 73, was having breakfast in his room around 8 am when the wall-mounted fan caught fire, they said. The fire was immediately doused by his aides, they added.
"The fire was caused by a short circuit and electricity supply to the premises was snapped after the incident," Deputy Commissioner of Palamu Shashiranjan told PTI.
No one has suffered any injury due to the incident and no significant damage has been reported, he said. The short circuit has been rectified and the fan that caught fire was removed, he added.
Prasad arrived in Medininagar, the district headquarters of Palamu, on Monday to appear before a special court on Wednesday in connection with a 13-year-old case pertaining to the violation of the Model Code of Conduct during elections.
He is slated to appear in the court of special judge Satish Kumar Munda. A case under IPC sections 188, 279, 290, 291 and 34, and section 127 of Representation of People's Act was registered against the RJD chief in Garhwa district after his chopper had diverted and landed in a paddy field allegedly owing to the mistake of the pilot instead of the scheduled helipad in Medininagar during the 2009 assembly polls in Jharkhand. -- PTI
« Back to LIVE