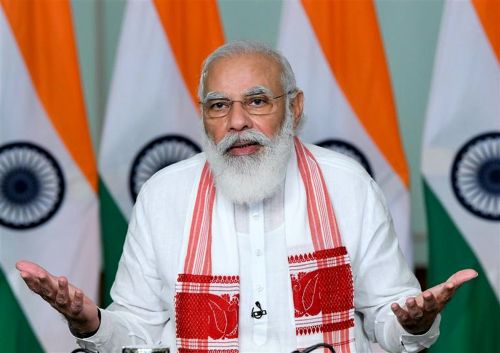 Prime Minister Narendra Modi will interact with Bharatiya Janata Party members from Uttar Pradesh's Varanasi on January 18, the party said on Saturday.
This will be Modi's first political programme involving party workers after the Election Commission announced the schedule for the elections to five state assemblies, including Uttar Pradesh.
Sources said it is likely to be a virtual interaction.
The Twitter handle of the BJP's Uttar Pradesh unit shared the programme's schedule and asked people to share their ideas and suggestions for it through the NaMo app.
Announcing the Assembly elections, the Election Commission has banned public meetings and roadshows till January 15 because of the surging COVID-19 cases driven by the Omicron variant and will spell out its future guidelines later in the day on Saturday. -- PTI
« Back to LIVE