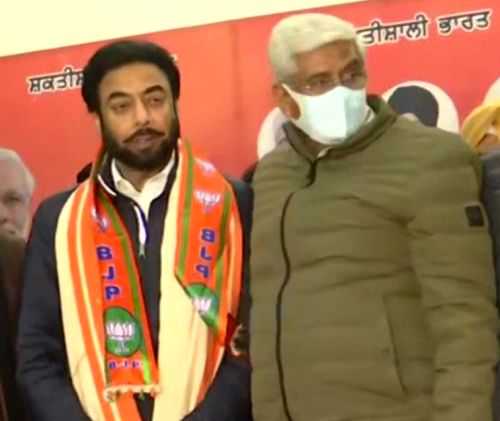 After the Congress denied ticket to him for the upcoming Punjab assembly polls, Moga MLA Harjot Kamal on Saturday joined the Bharatiya Janata Party in the presence of its senior leadership, including Union minister Gajendra Singh Shekhawat.
The Congress on Saturday released its first list of 86 candidates for the February 14 state assembly polls, refusing tickets to four sitting legislators, including Kamal.
The ruling party gave a ticket to Malvika Sood Sachar, the sister of actor-philanthropist Sonu Sood, from the Moga assembly seat.
"I joined the BJP today," Kamal said and thanked the party leadership, including president J P Nadda and Shekhawat.
Noting that he worked for the Congress for 21 years, the sitting Moga legislator questioned the Congress's choice of ignoring him and giving Sood the ticket.
"What are her qualifications? She is just Sonu Sood's sister," Kamal said while slamming Chief Minister Charanjit Singh Channi and state Congress chief Navjot Singh Sidhu.
He said it was "below the dignity" of their positions to bring Malvika Sood into the party fold.
She had joined the Congress on January 10.
Kamal had threatened to fight from Moga as an independent if he was not given the ticket, despite Channi promising said that he would be suitably adjusted. -- PTI
« Back to LIVE