« Back
All aspects related to Bengal train accident will be probed: Railway Board Chairman
January 15, 2022  16:20 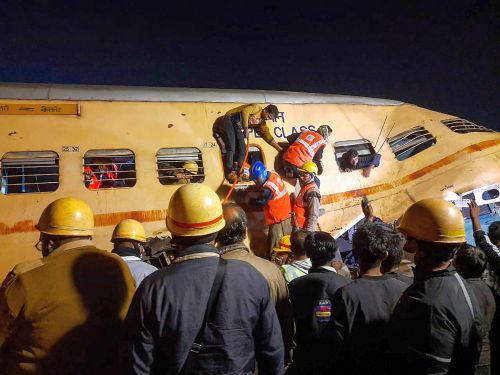 Railway Board Chairman V K Tripathi Saturday inspected the site where the Bikaner-Guwahati Express had derailed in West Bengal's Jalpaiguri district and said all aspects related to the accident will be thoroughly investigated.
At least nine people were killed and 36 injured after 12 coaches of the train went off the rails on Thursday, near Domohani in Alipurduar subdivision of Northeast Frontier Railway.
"Work is underway to clear the railway tracks at the accident spot and it will be complete soon. All angles in connection with the unfortunate mishap will be probed," Tripathi told reporters.
Several intercity and DEMU trains had been cancelled on the affected route on Friday, while a couple were short-terminated or short-originated. Another 10 long-distance trains were diverted through alternative routes.
Railway Minister Ashwini Vaishnaw had on Friday said preliminary findings suggest there was "some issue" with the equipment of the locomotive that could have caused the accident.
Vaishnaw said the actual reason would be ascertained only after dismantling the engine's equipment.
"The root cause (behind the accident) will soon come out. The Commission of Railway Safety is conducting an inquiry," he had told reporters after visiting the site. -- PTI
« Back to LIVE